So as I spend another train journey on a delayed train back home I have a bit extra time to reflect upon another really good evening of learning provided by @FAMS_SE. The topic this time was Femoroacetabular Impingement (FAI) and all the components of diagnosis, prevention and treatment.

The evening kicked off with a talk from Jerry Healy who is a very well respected radiologist working up in London who has taken a specific interest in FAI. He began his presentation by emphasizing that FAI is a “clinical diagnosis, not an imaging diagnosis” which is an important starting point for us to recognise as clinicians and will be emphasized by a few statistics from a later talk.

There was a summary of the two types of FAI syndrome (with care taken to follow the Warwick Agreement terminologies!);

Then we come on to the different types of imaging that can be utilised within the diagnosis of an FAI syndrome with a provided diagnostic imaging algorithm which is shown in Image One. 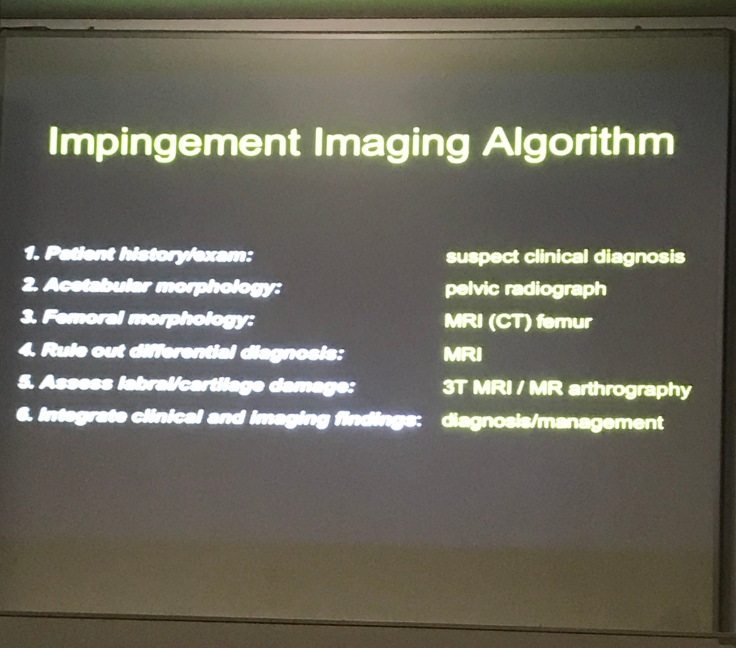 Image One- Provided by Jerry Healy in lecture slides

The starting point for most clinicians when wanting to understand the bony morphology of their patients with suspected FAI syndrome will be a simple X-Ray. From this an Alpha angle can be calculated, with figures of between 55 and 78 degrees quoted as the figures expected in aiding a diagnosis.

If signs of FAI syndrome are seen on the X-Ray then in elite sport there may be a desire to undergo further imaging, which in this case could be either MRI or MRA. The decision on which of these to choose must be made in conjunction with an experienced radiologist. However it was suggested that if MRI then it must be a 3T scanner, with MRA more useful at detecting labral tears.

The advantages of CT scans are that they allow the impingement to be seen dynamically which is useful if the case is to progress to surgery, and they are also superior to MRI in the detection of cartilage thickness. However a decision must be made if this is worth the radiation exposure that accompanies this form of imaging.

Now if we are going to utilise imaging it was widely recognised again this evening just how important it is to have a radiologist who you trust, and is knowledgeable in this area, otherwise the reports you receive back will be little to no use! Also though we must be aware of this issues surrounding imaging, which are just how many asymptomatic patients will displaying FAI characteristics on imaging. Dr Healy quoted a number of studies with figures like;

Therefore it is vital that we are thorough with our clinical examinations, and don’t just make the scan fit the player!

We were very fortunate to have Professor Griffin speak at the lecture this evening as he is a world expert on this particular topic having been a key author for the Warwick Agreement. The link to the paper for this can be found here (http://bjsm.bmj.com/content/50/19/1169). He began his talk with the most simple of explanations for the syndrome and it is one that people may find useful for their daily practice;

“The ball and socket don’t fit!”

This is a useful starting point for us, but doesn’t explain the whole story. The key message to take from Professor Griffin’s lecture and the Warwick Agreement isn’t just the morphology, but that it is a triad of symptoms, signs and radiological findings. It is not simply enough to recognise a thickened femoral neck on X-Ray and label them as having FAI Syndrome. They MUST have accompanying signs and symptoms!!! These symptoms may come in the form of catching or clicking for example, with an example of a clinical sign being decreased ROM. 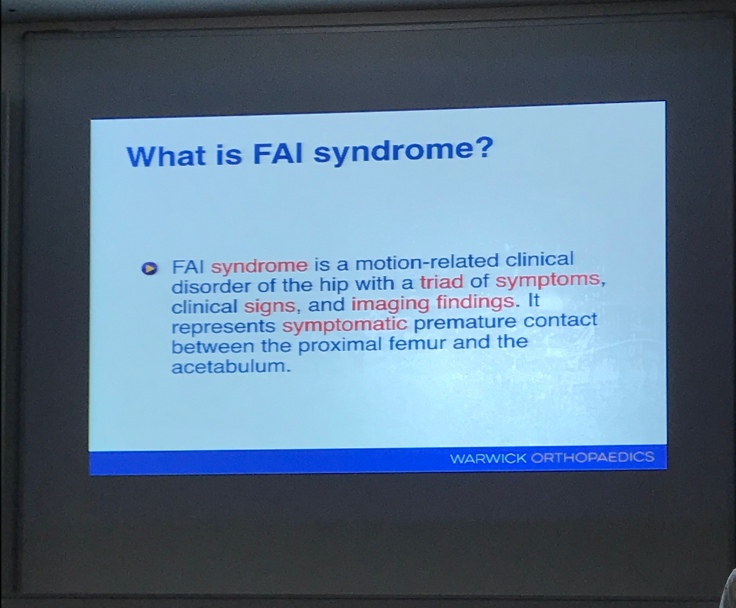 Image Two- What is FAI?

Key tips from Professor Griffin came in the form of common subjective reports from patients which are either the C Sign, the “deep pointer sign” or the “triangulation sign”. Although they have different names, the theme of these three signs is that the patient is unable to reach their painful point with it being too deep to put a finger on.

If our patient does progress to the point of requiring surgery with Professor Griffin, then what can we expect. Well there will be a decision made surrounding an open surgical intervention, or an arthroscopic surgery. Generally though it was reported that 95% of surgeries will be done arthroscopically, and following this 75% of elite footballers had returned to match play within 18 weeks. Professor Griffin reports that he believes that this would now be closer to 12 weeks if he were to repeat the audit.

Finally Mo Gimpel of Southampton FC stood up to try and take us through some ideas for prevention and treatment of the syndrome. His interest had stemmed from a questioning of why there was an apparent reduction of internal hip rotation in academy footballers under his care, and has resulted in a number of published studies.

There was dissemination of these study findings as well as some useful clinical tips. The first of these tips were things to look out for on assessment of our players which may get us querying if the cause of their hip/groin pain is FAI syndrome;

There was a discussion of the treatment framework currently in place at Southampton which utilises a lot of the work of Kinetic Control and author Mark Comerford. The department has specifically recruited staff to fit into this framework and use an understanding that successful management of this condition can come from education of femur and pelvic dissociation. The department works from a belief that Psoas may act independently of Iliacus to control the microinstability of the femoral head in the acetabulum, and maybe this instability is what differentiates the symptomatic from the asymptomatic patients.

Another great evening of learning provided by everyone at the FA Medical Society and I look forward to the first meeting of next season.

Thank you for taking the time to read.