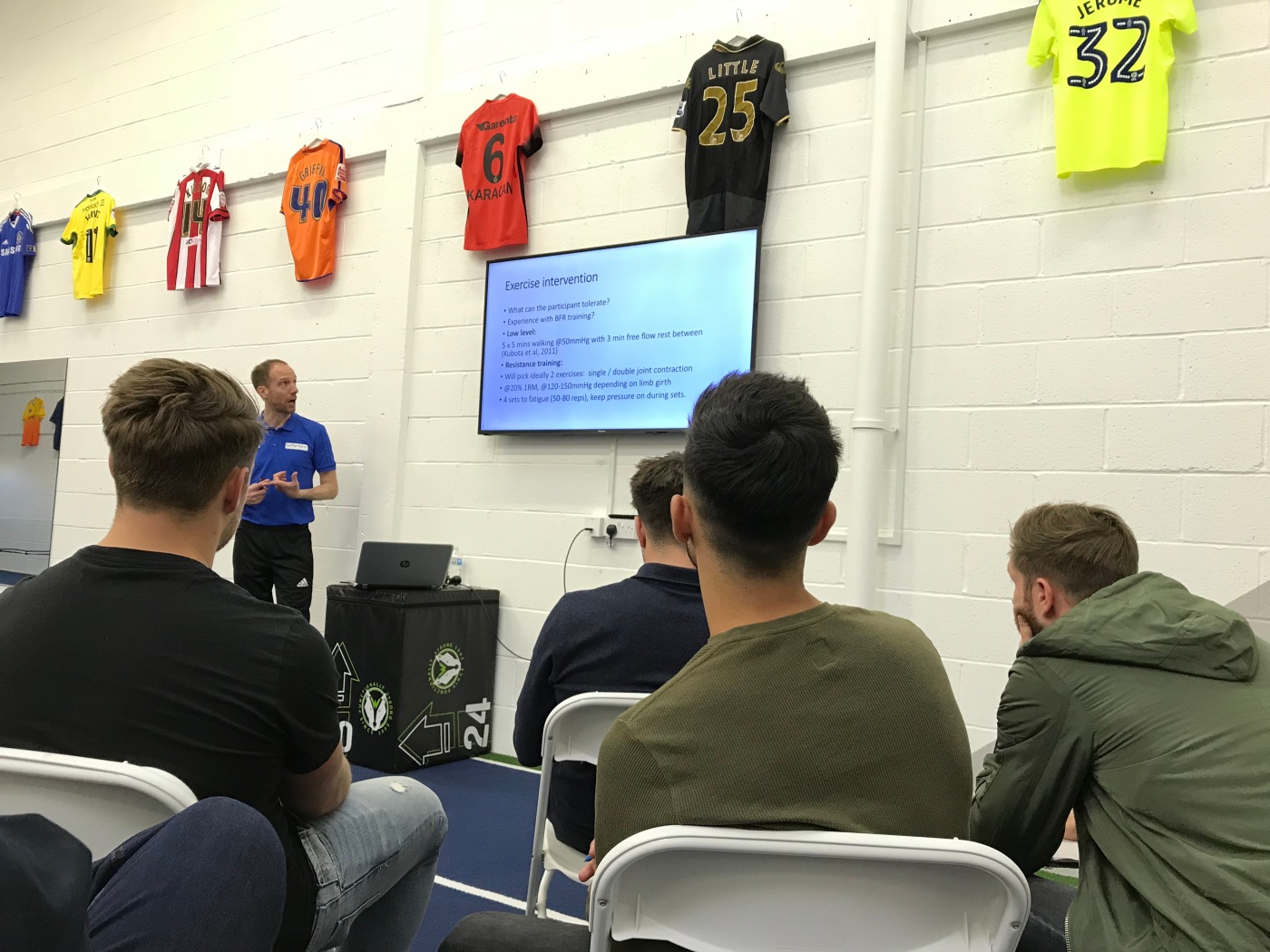 Last night I had the opportunity to attend the second in the series of Football Medicine evening lectures @GoPerformUK with Dan and Luke again putting together a great evening with some excellent speakers. Please see my reflections on each of the topics below, and feel free to get in touch if you want to know more.

The evening began with a talk from Jonny King who is part of the medical team down at Bournemouth FC. The theme of Jonny’s talk was the development of a comprehensive return to sport protocol within the department. This takes the form of four different key areas. I wont go in to each one in too much detail as I know that there will be an editorial coming out in the near future, so would recommend everyone keeps their eyes open for this. However I will give a quick description of each of the four areas;

Engagement- The aim of this corner of the principles is to increase patient compliance within the rehabilitation plan through allowing the player to have input. Jonny gave examples of how this could be as simple as timetabling their week so that they can have the time to take their kids to school a couple of mornings a week, but this may be something that isn’t possible when they are fit and training fully with the squad.

Empowerment- Down at Bournemouth there is a desire to allow the patient to take control of their rehabilitation process and therefore promote a proactive approach to the process. Jonny compared this to the athlete being the CEO of their rehabilitation, with the MDT forming the Board of Directors! There are regular roundtable discussions with the MDT where everyone is able to be open about what they feel has gone well, or not so well up to that point.

Feedback- This leads nicely to the feedback element, and how this is done at the roundtable discussions. There was an example of video feedback being used in the meetings so that senior coaching staff can see exactly what the player is doing, as they may never see indoor rehabilitation due to being out on the training field at that time of day.

Transparency- This is potentially the most important aspect if looking to achieve a successful return to sport. The ability to have an open and honest relationship with the player as they progress through the stages. Hopefully as therapists we can build up a strong relationship with these players that we are probably spending prolonged periods with on a one-to-one basis. This will allow for constant honest feedback from the player and allow for any rehabilitation plan changes to be made at appropriate times. 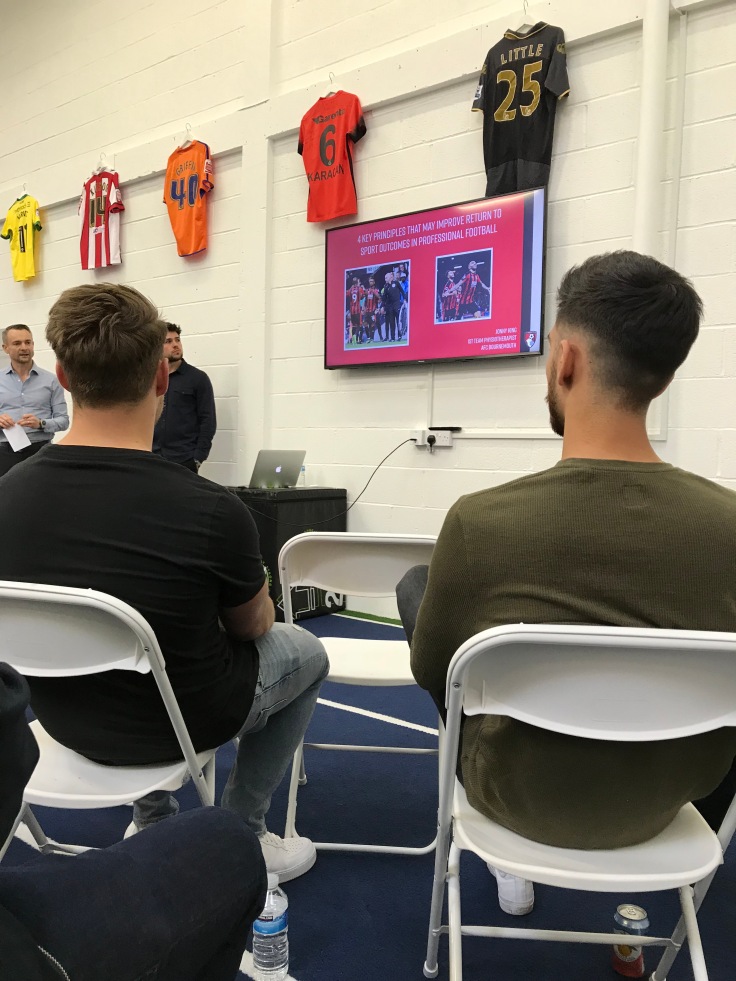 The key take home message from this talk was that it is vital that the return to sport process is driven by the athlete using their own autonomy. Hopefully if this is the case then they can return to sport as a more balanced and well-rounded athlete.

This talk from Luke was really interesting for me as it is an area that I have experimented with for patients, so it was good to hear how Luke has previously implemented it within elite sport.

Firstly Luke was keen to point out that there is a wealth of evidence appearing to suggest that Blood Flow Restriction (BFR) training works for hypertrophy of muscle, but there is not one clear consensus as to exactly why this is. Luke believes that it is useful in his practice due to the preferential recruitment of Type II muscle fibres, which is difficult to achieve within the load compromised athlete. 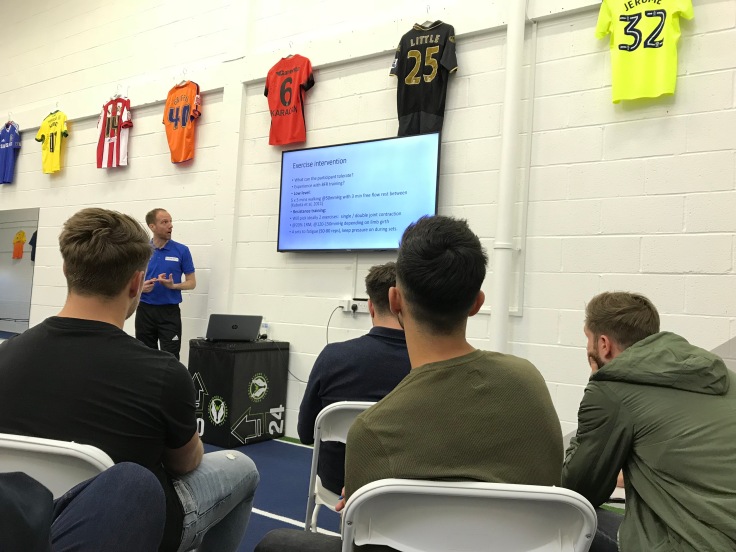 This brought Luke on to the indications for when BFR training may be of benefit. They are listed here;

Side effects to practice are not well researched, with a lot of the research coming from individual case studies from different authors. However Patterson et al. (2017) summarized some of the most commonly seen side effects following a questionnaire study;

When looking to perform a BFR training session there is some material available to help clinicians decide if it is appropriate for that particular patient and how it can be progressed. The work of Loenneke et al. (2012) provides a progression pathway for BFR training and I would recommend looking up the article which is referenced below for further information on this.

A key take home message from this particular talk was that Luke does not see BFR training as a substitute to high resistance training, but more of an addition to add into a weekly program without compromising the joint.

Richard Collinge- The Hip Joint. To screen, or not to screen?! (@CollingeRichard)

Richard is someone with a wealth of experience in elite football, and it was interesting to hear his views on the value of screening the hip joint. Especially given the well publicized views of Ronald Bahr on the lack of value of screening for injury prediction.

Richard introduced the idea of a potential “HIRD”, or a “Hip Internal Rotation Deficit” which presents in a similar manner to the pattern seen at the shoulder. This loss of internal rotation range of movement at the hip may suggest a capsular shift due to the sporting demands of football, whereby the players spend prolonger periods of time in externally rotated kicking positions. This idea may be supported by the recent work of Zhang et al (2018) who discussed a thickening of the capsule. Richard also presented some data that he had collected which suggested that this range of movement gets progressively worse over the course of the season, with players appearing to get stiffer and tighter in almost all hip ranges of movement. 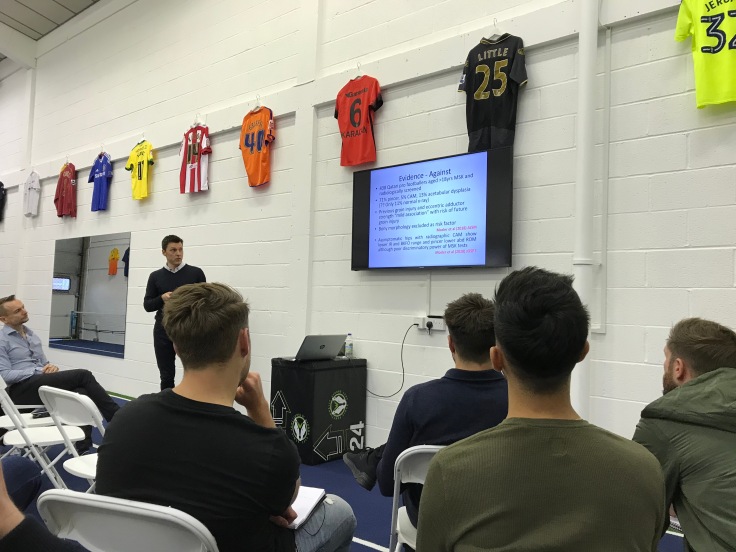 This links nicely to why it may be important to screen our athletes. The preseason screening that we take is just a snapshot of those players at that particular time. If we can collect screening data on a weekly, or even quarterly basis then it allows us to adapt the strategies that we are putting in place for our athletes. Knowledge that hip ROM decreases as the season progresses may mean that we focus more heavily on addressing this in the second half of the season for example. It may also help us to identify which players have restrictions in their hip ROM, and which present with hypermobile hips. This is important to acknowledge as they would require a stability program as opposed to a mobility program for those with progressive loss of range.

Matt presented on the topic of MCL rehabilitation and tried to highlight which cases may present as difficult rehabilitation cases. This topic is important with Ekstrand highlighting that MCL injuries are the most commonly seen knee ligamentous injury in professional football. 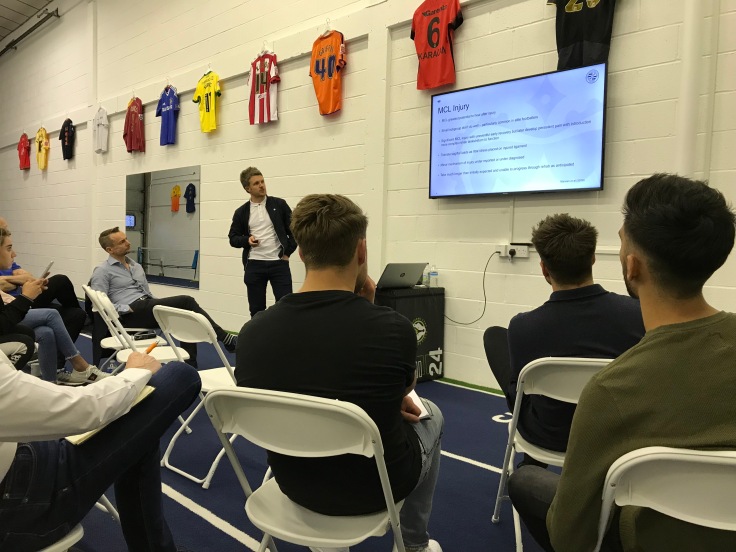 Anatomy appears to be a really important topic when considering how to rehabilitate each individual case with mention of these three structures coming up throughout the talk;

Matt discussed the apparent link of Posterior Oblique Ligament (POL) involvement in those MCL injuries that do not progress well through rehabilitation. So how can we assess for the POL involvement within the clinical setting? Well Matt suggests that we can either combine some external rotation of the tibia into our standard valgus stress test, or we can perform a Dial Test. The Dial Test is historically seen as a test of the posterolateral corner of the knee, however work from Pritsch et al. (2006) suggested that if there is medial knee pain when performing the Dial test at 30 degrees of knee flexion then we should be highly suspicious of deep MCL or POL involvement.

Why then could these become problematic? Well Matt proposed three great reasons why this might be the case. Firstly, there is a very close proximity of the deep fibres to the joint which can result in synovial fluid “leaking” between the damaged fibres. Secondly the brace in acute phases may be successful in limiting flexion, extension and valgus movements, however it cannot restrict external rotation and so the structure is being continually irritated. Thirdly there is a very close proximity of the ligament to the Saphenous Nerve.

There was then a video demonstration of rehabilitation strategies which look to assist in providing a dynamic stabilization to the valgus and external rotation stresses. This appears important if the passive stability has been compromised through injury to the ligament.

This was another great evening of CPD put on by @GoPerformUK. I would really recommend looking out for the next in their evening lecture series.

Pritsch et al. (2006)The importance of the valgus stress test in the diagnosis of posterolateral instability of the knee.